An evening to reflect on the changes in the world of work linked to its digitalization. REMONTER ↑

An evening to reflect on the changes in the world of work linked to its digitalization.

This Thursday, around 100 people, students, parents, education personnel, and company employees were gathered at the House of Startups for the Digital Explorer Conference: Jobs of the Future.

The emergence of new professions and the acceleration of the pace of change, mainly due to digitalization, raise the question: how can we prepare and support this evolution to understand the new digital challenges? IMS Luxembourg and Care Luxembourg have joined forces to attempt to answer these questions by carrying out the Digital Explorer project, co-financed by the Ministry of National Education, Children and Youth, the Ministry of Labour, Employment and the Social and Solidarity Economy, as well as the European Social Fund. The evening aimed to look back on the first edition that took place last autumn and to give participants keys to understanding the profound changes that await the world of work in the next 5 to 10 years.

But what is the Digital explorer project? Let's go back in time: last October, during DayCare, 22 pairs of students aged between 16 and 18 and company employees were trained for one day. In addition to this first immersion in the world of work for the student, each pair had to sketch out the jobs of tomorrow in a world in full digital transition. Guided in their reflection by co-creation tools, these pairs were able to draw the outlines of a digital vision, the fruit of their observations, and thus try to provide elements of answers to initiate this digital transition within companies.

In the opening session, different actors were invited to speak: Mike Engel, Director of the Maison de l'Orientation and Claude Tremont, Head of the Employment Department at the Ministry of Labour, Employment and Social and Solidarity Economy. They were respectively able to underline the importance of guidance and of the necessary changes in both the national education system and the labor market to ensure the integration of the new generations into the labor market.

Then three pairs formed during the last edition of the Digital Explorer project were invited to talk about their experience during a round-table discussion. Employees and students were thus able to share what had most impressed them on that day and express their opinions on how one or the other imagine working in a few years. In addition to the crossgenerational exchange of points of view, the plurality of professions and sectors of activity enriched the debate: the medical biology sector with the communication manager from Bionext Lab, the industry with a quality and digitalization engineer from ArcelorMittal and the banking sector with the HR manager from Raiffeisen.

To close the evening, Christian Scharff, President of IMS Luxembourg and Partner People & Organization Leader at PWC Luxembourg, shared his expertise. He resituated the context of the digital transformation of the world of work, the sectors most impacted, and then outlined the collective challenges ahead. Indeed, the shortage of skills could have a negative impact on many companies soon: it would affect both current employees and young people leaving school, none of whom could be trained in professions that do not yet exist. The societal challenge is a major one and calls on the various stakeholders to collaborate to meet it.

It is in this perspective that IMS Luxembourg and CARE Luxembourg will renew their Digital Explorer initiative, again in the framework of DayCare on 28 October next. 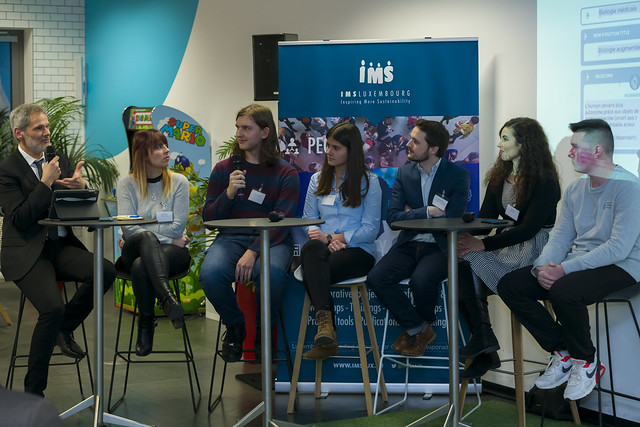